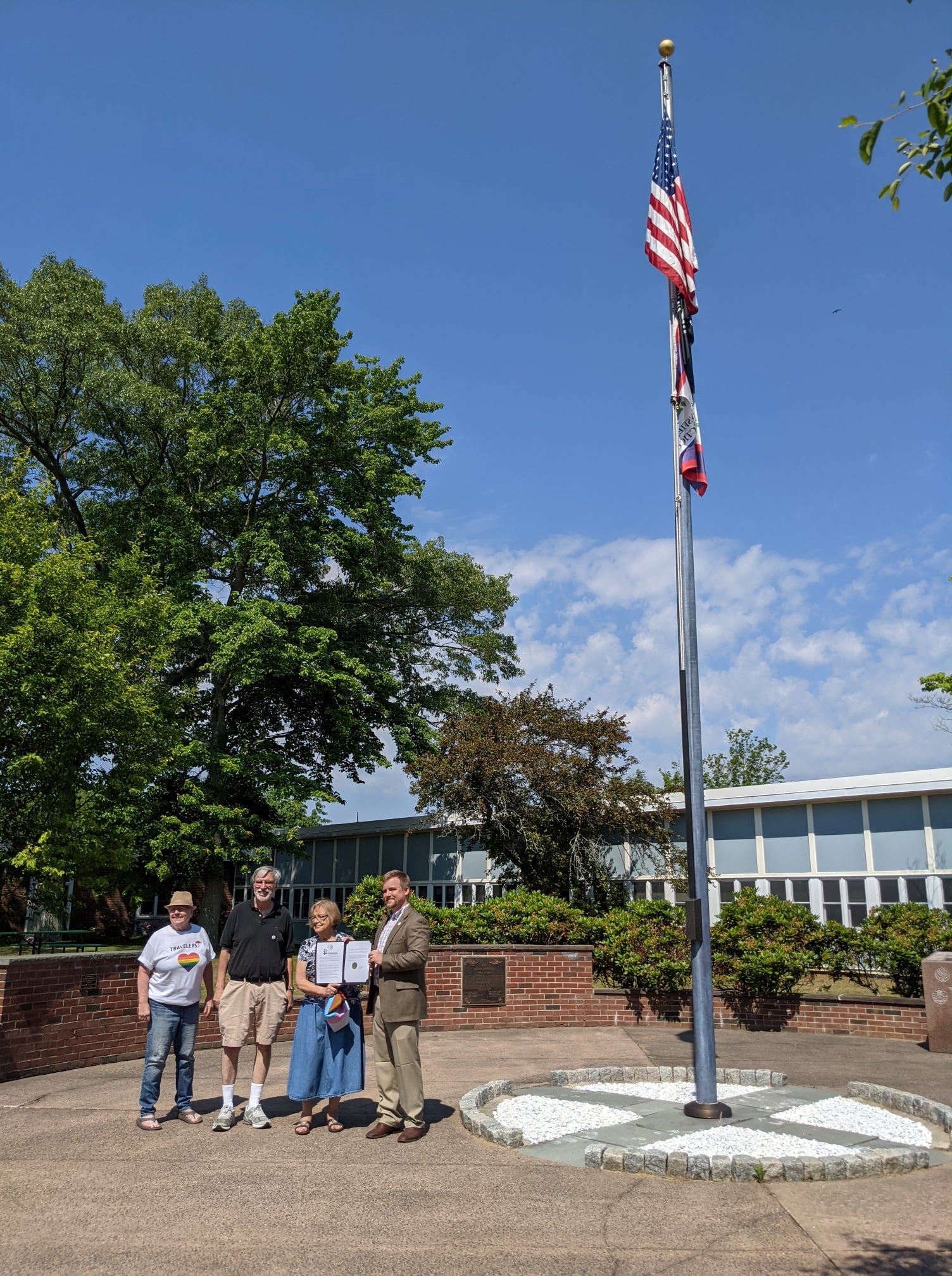 On Monday, June 7, Mayor Antonia Moran and Town Manager Ryan Aylesworth were joined by members of the Mansfield Town Council and Mansfield Board of Education for a ceremonial signing of a proclamation recognizing June as LGBTQIA+ Pride Month and for the raising of the Progress Pride flag at Town Hall.

On June 28, 1969 patrons of the Stonewall Inn resisted unfair and inhumane raids against their queer space.  The following year, Frank Kameny, Lilli Vincenz and other queer activists organized the first “U.S. Gay Pride Week and March” on the anniversary of the Stonewall Rebellion.  Since then, each June has served as an opportunity for the LGBTQIA+ community, activists, and allies all around the world to commemorate the achievements of the on-going movement for LGBTQIA+ rights and important work still to be done to advance justice and equity for all. While Stonewall Rebellion was not the first demonstration in the queer rights movement, it is widely renowned as a major tipping point for the Gay Liberation Movement and its anniversary has become synonymous with the celebration of Pride Month by the LGBTQIA+ community.

A key demand of activists, and a central theme of Pride Month, is to reject enforced invisibility and the shame such oppression is supposed to impose. Raising and displaying the iconic Pride Flag is an important symbol of visibility and inclusion. The symbol of the rainbow has long been a cross-cultural archetype of hope and it remains so today for the LGBTQIA+ community. Gilbert Baker, creator of the original Rainbow Flag described the intent as follows: “A Rainbow Flag was a conscious choice, natural and necessary. The rainbow came from earliest recorded history as a symbol of hope. …A Rainbow Flag would be our modern alternative to the pink triangle.” This flag flew at the San Francisco Gay Freedom Day Parade celebration on June 25, 1978. 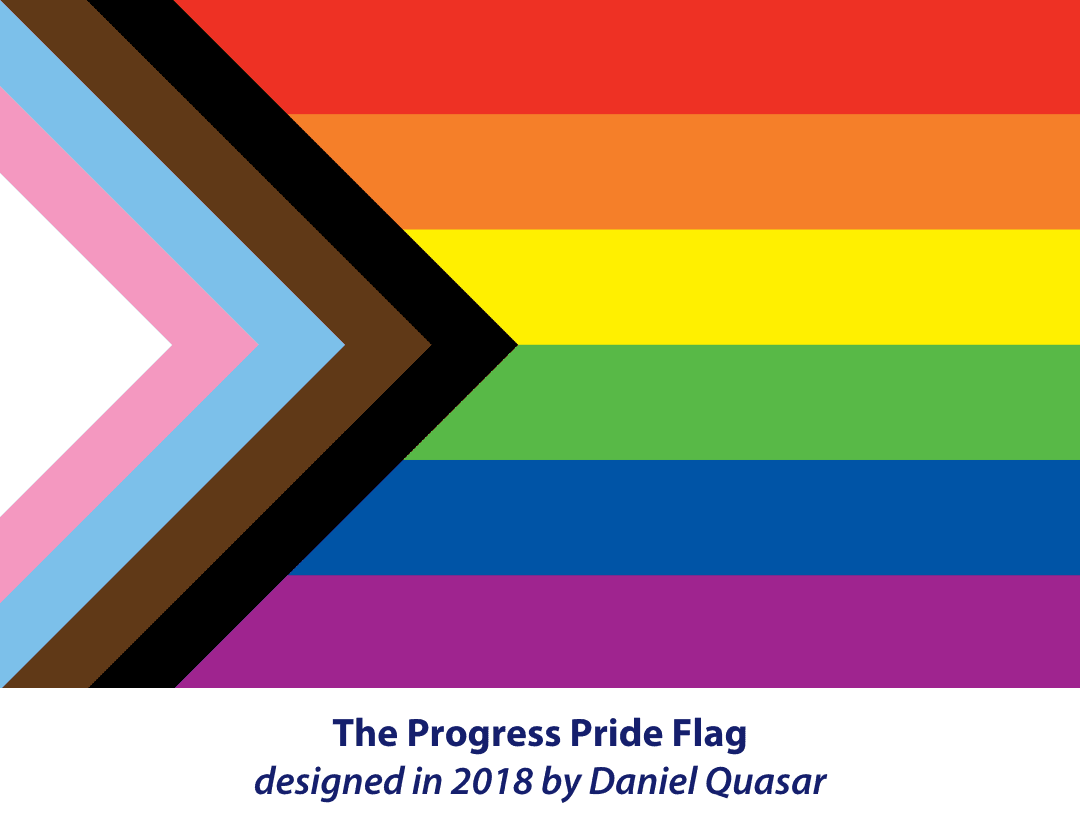 Since then, Gilbert’s design has been adopted, adapted, and revised to represent the broad diversity of the LGBTQIA+ community such that no single flag can be said to be the “official” Pride Flag. For instance, on June 8, 2017, the city of Philadelphia adopted a revised version of the flag that adds black and brown stripes to the top of the six-color flag, to highlight people of color in the LGBTQIA+ community. Today, we continue the celebration of intersectional diversity, visibility, and solidarity through the Progress Pride flag, designed in 2018 by Daniel Quasar. This flag further adds the colors of the transgender pride flag, alongside the black and brown stripes representing Black, Indigenous, and People of Color communities within LGBTQIA+ rainbow. The black stripe also holds a second meaning in this design, recognizing and mourning those members of the LGBTQIA+ community who have been lost to, and are living with the stigma of AIDS and HIV. The arrow of this design reminds us of the importance to keep moving forward in the march for liberation for all, and that this liberation must be anti-racist and trans-affirming.

“The fabric of freedom is an open weave, with spaces left for us to insert our own versions of the story.” 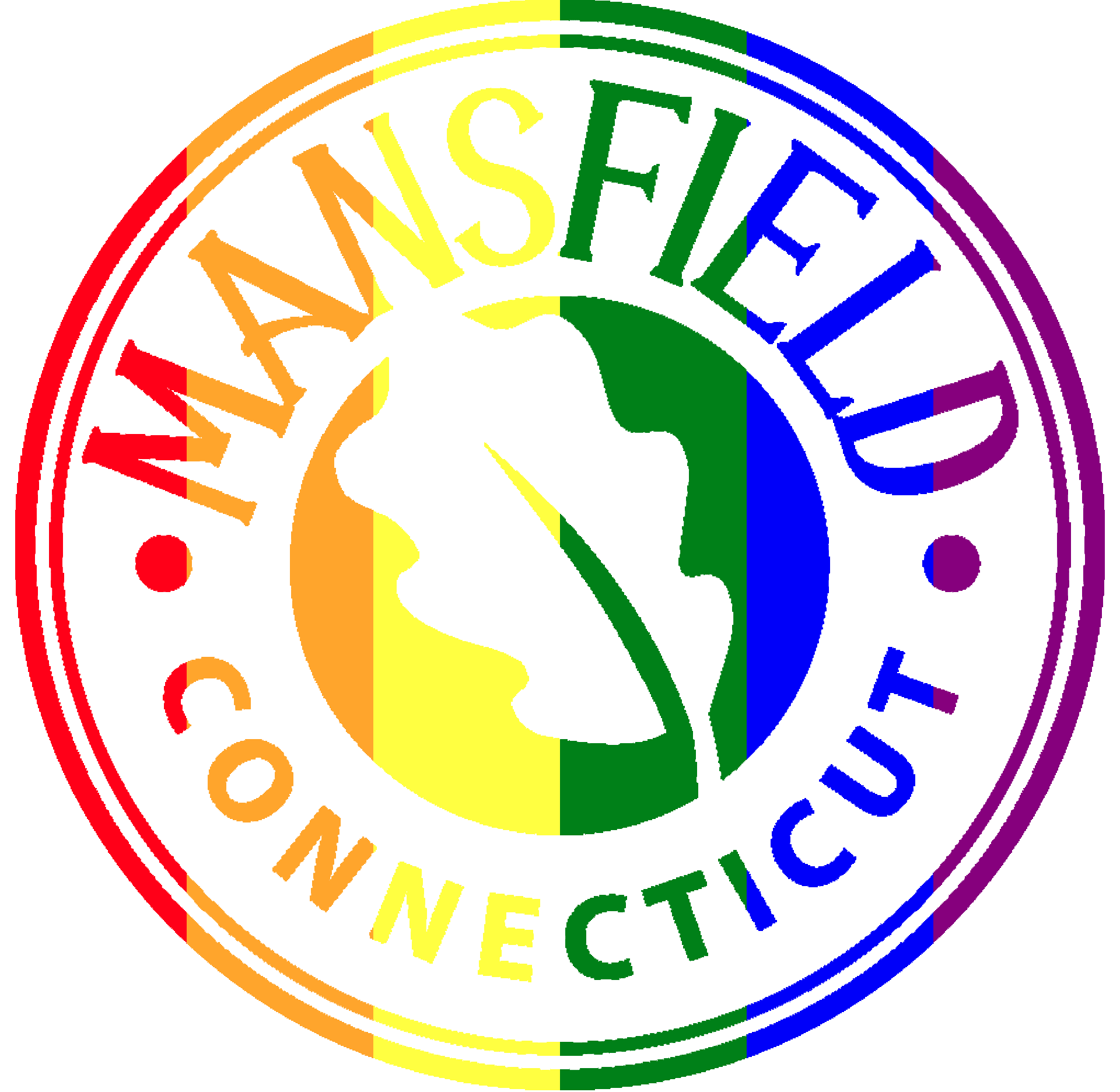 At its May 24, 2021 meeting, the Town Council voted unanimously in favor or authorizing Mayor Moran to issue a Proclamation recognizing June as LGBTQIA+ Pride Month.

Read the full text of the Proclamation here.

NOW, THEREFORE, I, Antonia Moran, Mayor of the Town of Mansfield, Connecticut and on behalf of the Mansfield Town Council, hereby proclaim and recognize June 2021 as Lesbian, Gay, Bisexual, Transgender, Queer, Intersex, Asexual, Plus (LGBTQIA+) Pride Month in the Town of Mansfield and urge citizens to actively promote the principles of equality, love, and acceptance throughout the community

Mansfield residents and business owners are invited to pick up a free Progress Pride flag to display at their homes and businesses.

Flags will be available starting June 1 at

Share your pride with us: Snap a photo of your flag on display and post it on social media with #MansfieldIsProud or email your photo to us at YSB@MansfieldCT.org. 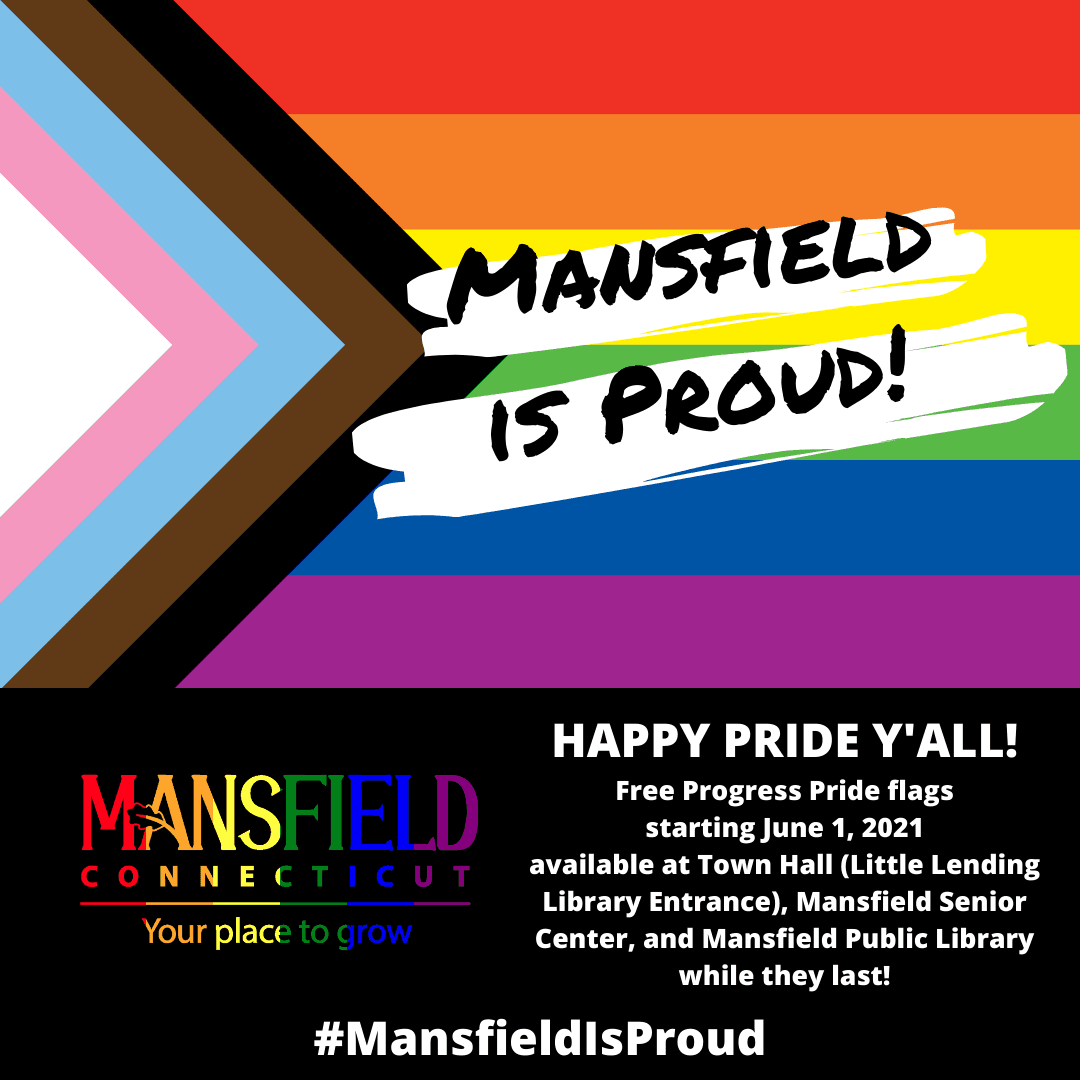 Add some LGBTQIA+ inclusive books to your summer reading list with these suggestions available at the Mansfield Public Library and the Mansfield Youth Services office:

Resources Available for our LGTBQIA+ Residents

Mansfield Youth Pride (MY Pride) group is open to Mansfield residents in grades 5-8 who are part of the LGBTQIA+ rainbow (and allies are welcome too).

Please contact the Youth Services Department for more information about MY Pride.

Continue learning about the history of Pride and the LGBTQIA+ experience in the United States with these resources:

Stonewall Forever: Interactive online, history of the original Stonewall Riots and ongoing stories from LGBTQ folx. People can learn and add their own LGBTQ stories and history